There are currently over 400,000 ATMs in the United States (roughly 173 machines per 100,000 adults). Spanning banks, credit unions, and retail locations, it is unlikely for most in the US to have difficulty at least finding a nearby machine. While nowhere near the penetration reached by the public pay phone (2.6 million in the mid-90’s), the seemingly fickle loyalty of the average consumer begs the question – will your ATMs stay relevant?

Pay Phone Versus the ATM

(I hope you searched that section break on Google Images. I sure did…and you know what I found? Nothing. So, you’re welcome.) 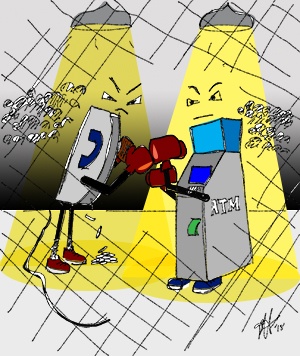 Pay phones were once a big deal and a booming business. Featured in movies and widely used, these machines were pretty much everywhere. Because, if you wanted to get in touch with someone, you had to either show up at their doorstep or give them a call. From a landline.

Even cordless landline phones did not become big until the late 80s and early 90s. So, while the 1980s saw the introduction of car phones and even mobile, most people had little idea what was coming down the pipe.

But down the pipe it came. The late 1990’s, Western Europe and North America began to see an influx of cellular technology. As more people saw the benefits and convenience to having a phone on-hand at all times, market penetration quickly grew. By 2003, mobile phone usage was over fifty percent (50%) throughout the United States – hitting nearly full penetration by 2013.

And, as the majority of consumers were able to simply make a phone call from the small computer in their pocket, the pay phone simply reached obsolescence.

ut your mobile phone doesn’t have a teleporter, access to a large vault of funds, and cash insurance. At least, mine doesn’t. And therein lies the biggest difference between the pay phone and the ATM  – physical deliverable.

While a phone call is utilizing wiring or airwaves to connect two entities at differing locations. The ATM, in addition to providing account inquiries and transfers, dispenses and (occasionally) deposits cash.

A Brief Note About Cash

Despite the continuing growth of other payment avenues, cash is still a top tool used by consumers. It is the top payment utilized by 18-24 & 45+ year olds and the second choice for the 25-34 age group, outstripped only by debit cards.

Unlike the formerly popular pay phone, ATMs provide a service and deliverable that is both desired and not easily replaced. As long as these machines continue to keep up with changing preferences and technologies, it is unlikely they will see an end any time soon.

Rebecca Hellmann has been researching and writing in the payments technology industry for over six years. Prior to the payments industry, Rebecca developed marketing, branding, and content for businesses such as Bil-Jac, Benjamin Franklin Plumbing, and Homestead Furniture. She currently works as Director of Marketing for FCTI, Inc.