He strives to make the world a better place – helping PayPal be a global leader in the LGBTQ community while managing the Mircea Maria Gerard Fund, a Florence-based foundation he created in honor of his late husband. He’s also an avid traveler, rarely staying in the same place very long.

Tell us a bit about your role at PayPal.

There’s never a dull day. I look after all of our core payments for Europe, the Middle East and Africa as part of the management team working in the PayPal Luxembourg Bank. My team is multi-country, so I travel almost every week. Some mornings, I have to ask myself, “What language am I supposed to speak right now?” And that’s the thrill of working for PayPal. We operate in a global community without borders, helping make a better world. I do try to get home to Amsterdam on the weekends, even if it’s a bit of a haul.

My late husband, Mircea, and I met 18 years ago when I was working in Brussels. We were one of the first couples to get married in Belgium when they passed the marriage equality law in 2008. When I took my job with PayPal in Luxembourg five years ago, we found out that Luxembourg didn’t have marriage equality. The two of us showed up with our marriage certificate from Belgium, and we were told that they could register me, but not my “friend.”

Well, sometimes a door closes, and a window opens.  It was a real turning point, especially for Mircea. He always loved art restoration and Italy, so he started studying at the Accademia in Florence, and I commuted to Luxembourg.

Then, of course, the first gay prime minister of Luxembourg passed marriage equality. He heard my story, and he asked, “Come on – can you guys move to Luxembourg?” I responded, “Luxembourg or Florence? Sorry, you’re a little late! Food is a bit better in Italy.”

You’re a leader in the EMEA branch of PayPal Pride, what does that entail?

For me, it’s a balance between thinking big picture – getting the Prime Minister of our headquarters’ country involved, working with the United Nations – but also thinking and acting locally. It’s so important to build a culture of caring and inclusion, and living that day-to-day in the way we do business with the rest of the world.

I was contacted by someone I know at the United Nations about whether PayPal would be interested in supporting an effort to create a global corporate code of conduct for LGBTQ. My response was, “Where do I sign up?” It took about a year and a half to get everything in order, and we had the official release last September. PayPal is quoted and recognized with a case study as a best practice.

What is the role of PayPal Pride?

Gay rights are human rights, and human rights can be given, but also taken away. It is so important that everyone at PayPal understand the need for ongoing engagement to respect and understand others, both at work and in the wider community in which we live.

PayPal Pride is about taking pride in our people: making sure that our HR code of conduct meets, and pretty much in practice always exceeds, minimum standards and local laws for LGBTQ rights, raising awareness and raising a understanding with staff. It’s also about engaging the local communities in which we operate. To respect and embrace the differences in people is what makes each of us unique. 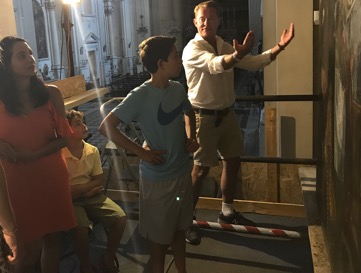 When I was widowed two years ago, everyone was so understanding across the organization. I just try to imagine what it would be like to work for a company where I had to be in the closet, and no one could know about my husband. I don’t know if I would have made it through. I am so fortunate to be part of such a great organization.

Two years after moving to Florence, Mircea graduated and started working as an art restorer – renaissance paintings, frescos, that sort of thing. When he passed, I started a foundation in Florence in his memory. It raises money and manages projects for art restoration and conservation. We also help put students through school to do art restoration who wouldn’t be able to afford it otherwise. Supporting anyone who makes our world beautiful, in any way.  That’s one of my big passions.