Dubai, October 9th, 2017: September data signalled a sharp improvement in business conditions in Dubai’s non-oil private sector, driven by steep expansions in output and new business. That said, the rate of growth eased since August. The seasonally adjusted Emirates NBD Dubai Economy Tracker Index – a composite indicator designed to give an accurate overview of operating conditions in the non-oil private sector economy – was at 55.2 in latest survey, down from 56.3 in August. Despite the rate of growth softening in September, it remained in line with the survey’s historical average.

“The September survey points to a continued solid expansion in Dubai’s economy, with retail & wholesale trade and construction data particularly encouraging.  Year to date, the Dubai Economy Tracker index has averaged 56.3, markedly higher than the average for the same period last year, which supports our view that Dubai’s GDP growth is likely to accelerate this year.”

Output in Dubai’s non-oil private sector rose at a sharp rate in September. The latest finding extended the current sequence of growth to 19 months. Strong growth was indicated in all three monitored sectors, with the fastest expansion being recorded in the construction sector. Firms commonly noted that strong underlying demand for goods and services produced in Dubai had led to increased output requirements in the most recent survey.

Job creation was recorded for the seventh month running in September. The rate at which employers hired additional staff was the fastest since April. That said, the rate of growth remained only slight overall and below the long-run series average.

The latest survey data signalled growth of new business for the nineteenth month running. Panel members that reported higher inflows of new work frequently mentioned improving economic conditions and better marketing techniques. The rate of growth eased to a four-month low, but remained strong overall and in line with the survey average.

An uptick in business confidence was registered in September. Moreover, optimism reached a four-month, matching that registered in May. Many respondents forecast that product innovations and a general economic upturn will lead to greater output over the next 12 months.

Input price inflation eased in September and registered below the long-run series average of 53.6. Both rising wages and higher purchase prices contributed towards the rise in average cost burdens. Input cost inflation was indicated in the wholesale & retail and construction sectors, whilst travel & tourism registered a slight fall.

Average prices charged by firms operating in Dubai’s non-oil private sector fell in September. The rate of output charge deflation was the sharpest recorded for five months. According to anecdotal evidence, companies reduced their selling prices in order to remain competitive and stimulate client demand. 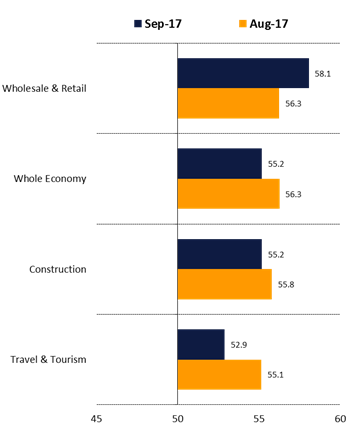