The latest data indicated a strong start to the final quarter of 2017 for Dubai’s non-oil private sector. Steep expansions in activity and new business contributed to the sharp improvement in business conditions in October.  The seasonally adjusted Emirates NBD Dubai Economy Tracker Index – a composite indicator designed to give an accurate overview of operating conditions in the non-oil private sector economy – rose to 55.6, from 55.2 in September. Wholesale & retail was the best performing sector in October.

“The improvement in the Dubai Economy Tracker index is largely on the back of stronger output and new work growth, although intense competition is still pressuring firms’ pricing power and margins.  Businesses surveyed were more optimistic at the start of Q4, which is typically ‘high season’ for the travel & tourism sector.”

Private sector companies noted a further increase in business activity in October, in part reflecting improving client demand. The rate of growth was sharp overall, and broadly in line the average seen throughout 2017 so far. Furthermore, the most recent data extends the current sequence of growth seen since March 2016. At the sector level, the construction industry reported the strongest output expansion for over two-and-a-half years in October.

In response to rising output requirements, firms continued to hire additional staff for the eighth month running. Job creation accelerated and reached a solid pace overall. Moreover, employment growth was the most marked since April.

Input cost pressures faced by non-oil private sector firms ticked up in October and hit a 26-month high. The rate of input price inflation was solid overall, albeit below the series long-run average. At the sub-sector level, companies in the construction industry reported the sharpest rates of increase.

In spite of rising cost pressures, selling prices continued to fall for the second month in a row during October, amid reports of intense market competition. Companies in the travel & tourism and wholesale & retail sectors registered a decrease in output charges, whilst those in the construction sector noted a marginal increase. 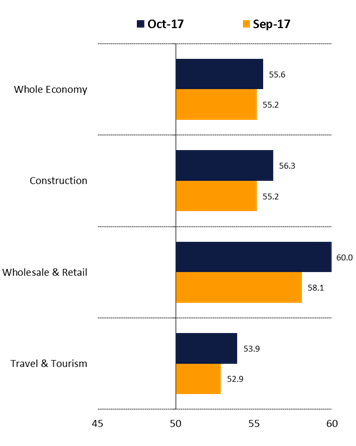